My second, and final, entry into the solar system cupcake contest is one dozen Earth cupcakes. 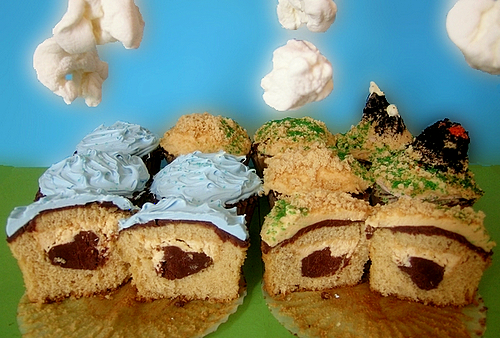 A section of our beautiful home planet is represented in cupcake form. This edible Earth is a brown sugar cupcake, filled with two layers - a layer of chocolate ganache to represent Earth's solid rocky core and a layer of caramel cream to represent Earth's molten core. The cupcake is then coated in a layer of chocolate ganche to represent Earth's crust. On top of the "crust" on half of the cupcakes is a layer of ocean blue-tinted vanilla frosting to resemble Earth's oceans. The other half of the cupcakes have been frosted in caramel cream and sprinkled with finely ground golden Oreos and green sprinkles to resemble Earth's land and vegetation. The mountains, as well as the volcano, have been structured with the caramel cream and coated in regular chocolate Oreos and the snowcaps are made from melted white chocolate; a few orange sprinkles sit inside the volcano to resemble molten lava. Marshmallows have been hand-formed to resemble clouds hanging above this section of Earth. *Use golden Oreos and chocolate Oreos with the cream fillings removed to sprinkle the “land” cupcakes – simply place them in a food processor until finely ground, or place them into a strong ziploc bag and roll a rolling pin over the bag until the cookies are finely ground. *Use green sprinkles to resemble vegetation on the “land” cupcakes and a few blue sprinkles on the “ocean” cupcakes. *For white chocolate mountain snowcaps, simply melt a couple squares of white chocolate for 20-30 seconds in a microwave, then use a spoon to place a small amount on the mountaintops.
« Jupiter Cupcakes
Matcha Cocoa Cupcakes »