I made this cupcake intending to enter it into December's Iron Cupcake Earth challenge Chocolate With A Twist. Then after I made it I thought it wasn't good enough. It tasted great, but I didn't think it was the worthiest contender. Then as I keep looking at them sitting there in the kitchen I thought, what the hay, I'll enter them! Here is the matcha cocoa cupcake. 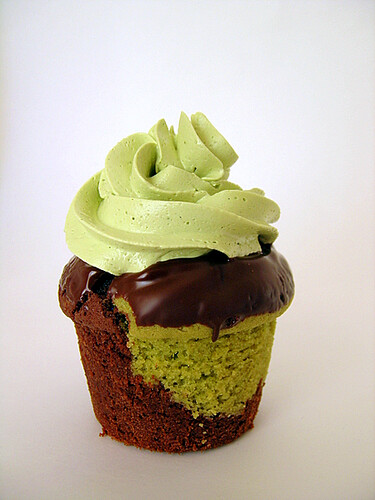 Yes, I need to work on my piping skills, I know! 🙂

I call it the matcha cocoa cupcake, because it does taste similar to the matcha hot cocoa recipe I enjoy. The chocolate cake in these cupcakes are very chocolatey, and the matcha is very matcha-y. The cake is dense and heavy and quite filling.

The dark chocolate ganache is a nice touch, and the matcha Swiss meringue buttercream is to die for. This is my second attempt at making SMBC (my first attempt failed) and it went really well. The texture is amazing, almost mousse-like. It pipes really well. The matcha taste in the SMBC is not overpowering and adds an extra light matcha flavor.

Thank you to Cupcakes Take The Cake for posting my matcha cocoa cupcakes on your blog!

Our December ETSY PRIZE-PACK is from artists:
* BETTY TURBO
* as well as a pair of cupcake earrings from LOTS OF SPRINKLES
* PLUS, IronCupcake:Earth can not forget our good friend, CAKESPY, who is now going to be doing a piece for our winner each month until further notice -sweet!

As an added bonus for December we have adorable cupcake pincushions complements of SWEET CUPPIN CAKES BAKERY AND CUPCAKERY SUPPLY.